Artificial sweeteners are said to be ‘lite’ but they leave a heavy burden on your health. Recent studies have confirmed that the sweeteners used in diet sodas and other lite drinks increase the risk of type 2 diabetes. 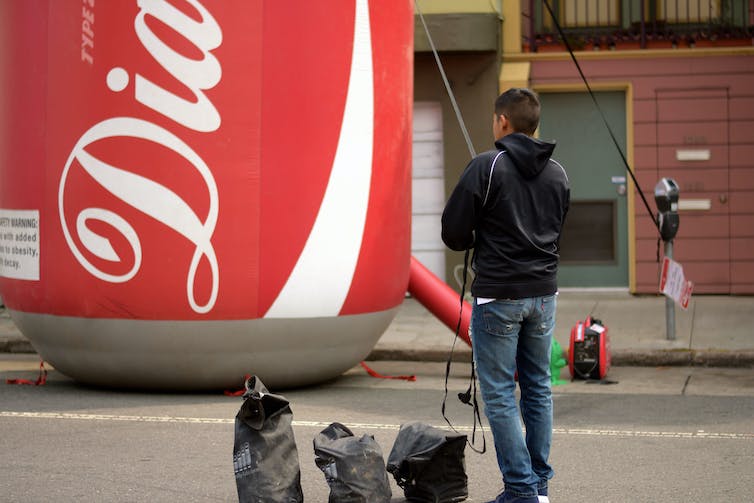 Often asymptomatic, type 2 diabetes is the most common form of diabetes, and is most often found among people who are overweight and sedentary.

A 2017 study from France shows that people who “always or almost always” add sweeteners to their drinks – in sachet or tablet form – had an 83% higher risk of developing diabetes than those who use them “never or rarely”.

Aspartame, the most commonly used sweetener, and, more recently, sucralose (aka Splenda), have been used to replace sugar in so-called “diet” sodas for over 30 years. 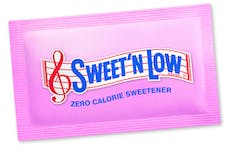 Even though the quantity of artificial sweeteners in our diet has increased massively in recent years as industrial manufacturers add them with growing abandon to not just drinks but also cereals, biscuits, cakes, low-calorie yoghurts and even certain medicines, reliable and precise data on their health impacts are rare.

Such products are marketed as low-calorie alternatives that are therefore healthy. This perception encourages consumers to overuse sweeteners to avoid putting on weight. But, even in moderation, these additives can have negative effects on health.

Today, sweeteners are increasingly controversial and suspected of contributing to weight gain and being carcinogenic.

This has independent researchers across the world seeking to measure their real effects on health, particularly their impact on metabolic diseases.

Increase risk of diabetes and cancer

A team at France’s Centre for Research in Epidemiology and Population Health at Inserm, has been contributing to this growing body of health knowledge since 2012 through a research program on the risk factors for type 2 diabetes.

The program’s findings suggest that sugar substitutes should be treated with the utmost caution. In February, they published a study showing that the risk of diabetes increases with the consumption of artificial sweeteners. They had already shown that this risk was higher with so-called “diet” drinks than with regular sodas.

Their research is based on data from a cohort of nearly 100,000 French women in the Epidemiological Study of Women in National Education or E3N, one of the world’s few cohorts of this size.

This prospective cohort study has been monitoring the health of women who belong to the mutual health insurance company for French national education staff for the past 27 years. Initiated by epidemiologist Françoise Clavel-Chapelon, the study aims to improve understanding of women’s health and their risks of developing chronic conditions, such as cancer or type 2 diabetes.

Participants have completed detailed questionnaires on their diets since 1993, giving full details of each food intake, including snacks and appetisers prior to the three main meals and evening snacks. This gives researchers precise information, including pictures, of both the foods and drinks consumed and the average nutritional intake for each woman. The study ended in 2007.

Studying this data in 2013, our team was able to demonstrate for the first time a higher risk of diabetes associated with diet drinks rather than with regular sodas.

Of the 66,118 women followed during this project, 1,369 were diagnosed with type 2 diabetes. The team modelled the risk of developing the disease depending on consumption of three types of drinks: regular sodas, artificially sweetened sodas and 100% pure fruit juice. They took into account other factors such as physical activity, body mass index and family history.

Other studies had already shown an increased risk of diabetes associated with high consumption of soda in general.

This time, they managed to distinguish between them. For example, at 1.5 litres per week (the equivalent of a large bottle), the risk of diabetes was 60% higher with diet drinks than with regular sugary drinks. These results are all the more striking considering that people then drank less sugar-free sodas than we do today. The average back then was about 328 ml of sugary drinks each week (about a can), and 568 ml of “diet” drinks. 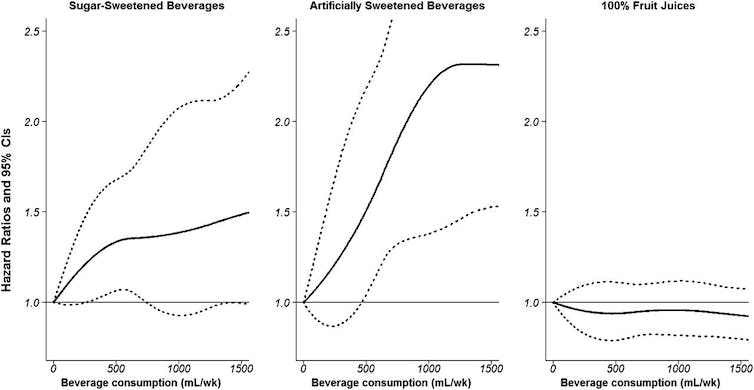 Significantly, there was no increase in the risk of diabetes with 100% pure fruit juices, which are naturally sweetened products.

Recently, the team used the E3N study to look at women’s consumption of sweeteners in sachet or tablet form. In their latest study they show that those who use them “always or almost always” had an 83% higher risk of developing diabetes than those who use them “never or rarely.”

Participants who used them regularly for more than ten years had a 110% higher risk than those who never or rarely used them, suggesting a cumulative effect over time.

The increase in risk persists when body mass index is taken into account, although it is slightly lower. It, therefore, appears that sweeteners have a direct effect on the risk of diabetes, even if being overweight is also a risk factor.

From a physiological point of view, the mechanism behind these results is still far from clear. One hypothesis is that people who consume a lot of sweeteners have a greater appetite for sugar, coupled with a tendency to overeat in general.

Sweeteners are thought to increase the feeling of hunger or to activate the T1R2/T1R3 receptors, which detect a wide variety of chemically and structurally diverse sweet-tasting molecules, along the digestive tract. If that’s the case, obviously sweeteners will not produce the desired effect, namely staying slim.

Another hypothesis is that those who consume large amounts of sweeteners also produce less of the GLP-1 (Glucagon-Like Peptide-1) hormone, which promotes pancreatic insulin secretion and suffer more frequent deregulation of their glucose metabolism.

Sweeteners can alter our gut microbiota

Lastly, research on animals at the Weizmann Institute of Science in Israel has shown that high consumption of certain sweeteners causes changes in the intestinal microbiota.

We now know these microorganisms, which regulate digestive, metabolic, immune and neurological functions in the human body, to be important for health. Altering them is thought to lead to glucose intolerance and insulin resistance, a trigger for type 2 diabetes.

Whether people are trying to lose weight or avoid sugars, it’s time to convey a more accurate message about the benefits – or rather, the risks – of so-called “lite” foods.

In ‘That Sugar Film', Australian actor and director Damon Gameau explores how sugar impacts the body.

Sale of fizzy drinks and fruit juices with added sugar will be banned in New Zealand hospitals from the 30th September 2015.

A healthy future without sugary drinks

If Tess Clarke had one wish, it would be that people swapped sugary drinks for good old fashioned water.

Coke has promised ‘less sugar’, but less is still too much